My wife and my 19-year old son were either happy, or recruited, to come sailing with me for the second outing in the life of Grey Fox. Since the boat was still on the trailer, we headed back to Glen Island to launch again and sail for the afternoon, after which we would recover back onto the trailer, because next week Clint is borrowing the boat and taking it up to Mystic, Connecticut for the annual WoodenBoat Show.

The day was pleasant, not too hot and with modest humidity, so the thunderstorm risk was low. After a rather long wait in line behind jet-skis and powerboats lining up to launch, we got the boat in the water and headed out. Everything went smoothly and after rowing out the channel – a bigger task with three people in the boat – we hoisted sail and had a delightful sail over to Sands Point on Long Island. The Sound is only about 2.5 miles wide at this part, so it wasn’t as adventurous of a voyage as it sounds.

My son Jeffrey did a nice job sailing the boat over, although I think he got way too much coaching from Dad. Especially at one point when the wind gusted up and he didn’t ease the mainsheet and the leeward rail got uncomfortably close to the water. After last week’s foray I was a bit gun-shy and probably yelling when talking would have been adequate.

From Sands Point, we headed towards Hart Island, which is actually part of the Bronx and is now the home of New York City’s “Potter’s Field”. Right across the harbor from City Island, with its long and storied boatbuilding heritage, Hart Island is where the City buries the indigent, the unidentified and those who die with no known relatives to claim the body and arrange for a proper funeral. It’s pretty from a distance but a bit freaky if you get too close. Especially when you see the “PRISON – Keep Away” lettering on one of the old abandoned buildings on the shore there. Anyway from there we sailed back to Glen Island. No drama this time, and the boat proved that it’s big enough for three people to sail and sit in comfort, and that with 6 to 8 knots of wind, it just moves and is a delight to sail. While I was fetching the trailer, I tasked Jeffrey with getting some photos of the boat in the fading light: 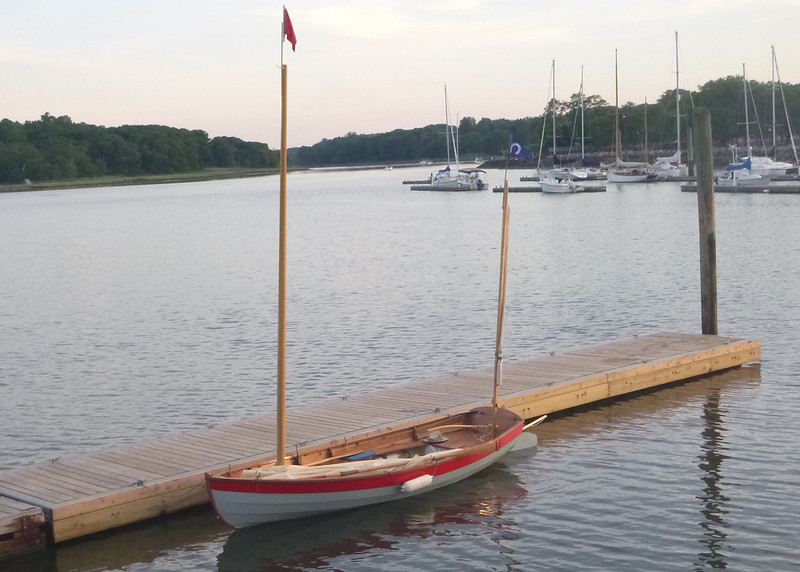 A 50-something investment banker from Larchmont, New York (about 15 miles from midtown Manhattan). Amateur small boat sailer, boatbuilder, kayaker, musician. I grew up spending summers sailing the New England coast on my grandfather’s beautiful 47’ 1952 Sparkman & Stevens wooden yawl. I’ve lived in Larchmont, a major and historic sailing center on Long Island Sound, for 25 years, but career and family obligations kept me off the water for all of my 30s and 40s, and only about 7 years ago did I get back on the water, first in sea kayaks, and then in small boats. View all posts by Larchmont Jim