From my limited dory cruising experience in Maine, I had learned that Maine in summer is notorious for changing weather conditions which frequently feature light winds or even full days of flat calm, but it can turn dicey in a hurry. Maine’s high tide ranges mean that beaching a boat is only practical if you can move it down the beach to the water if the tide has gone down while you’re ashore. With two guys and a cylindrical fender to use as a roller, you can move a boat of modest size and light weight down a beach.

The CIY combines a voluminous but remarkably lightweight (i.e. beachable) hull with a large sail rig that will move the boat along nicely in just a whisper of wind.

Three sets of reef points in the large mainsail allow shortening sail in a jiffy when the wind kicks up, and the yawl rig’s mizzen makes heaving-to head-to-wind easy, providing an extra margin of comfort and safety (as well as the ability to string a ridgeline for a boat tent). The balanced lug mainsail provides simplicity and ease of hoisting, reefing and converting from sail to oar. The hull shape carries a lot of volume aft, but strong rocker in the stern keeps the transom out of the water, allowing this large dinghy to row well.

The hull includes flotation tanks aft and forward, which ensure that the boat floats high enough to be self-rescuable in the case of a swamping. A large cockpit with wrap-around seating makes the boat comfortable for all-day sailing with several adults on board. The floorboards lift up to seat level to make an expansive sleeping platform for sleeping aboard, and the flat bottom panel with skeg (no keel or keelson) allows the boat to sit upright when beached or on a dock.

I built my Calendar Islands Yawl in my one-car garage over about 18 months of 2017 and 2018.  The hull planks, bulkheads, frames, transom, tank tops and seats came in the kit I purchased in a kit from Chase Small Craft.  Those parts were all cut by a CNC-controlled router table, which is fed the 3D CAD design files of the design.   Very 21st century, even if the design itself draws heavily from ideas and forms of boats from the 1800s.

When I was just about done planking the hull (in May 2017), I was working in the garage one Sunday afternoon when Clint texted me and said he was passing through New York and could he stop by and see how my build was coming.   Conveniently, I was home and told him to come on by.   While he was carefully eyeing the boat sitting upside down on the building frame, (something like this, ) 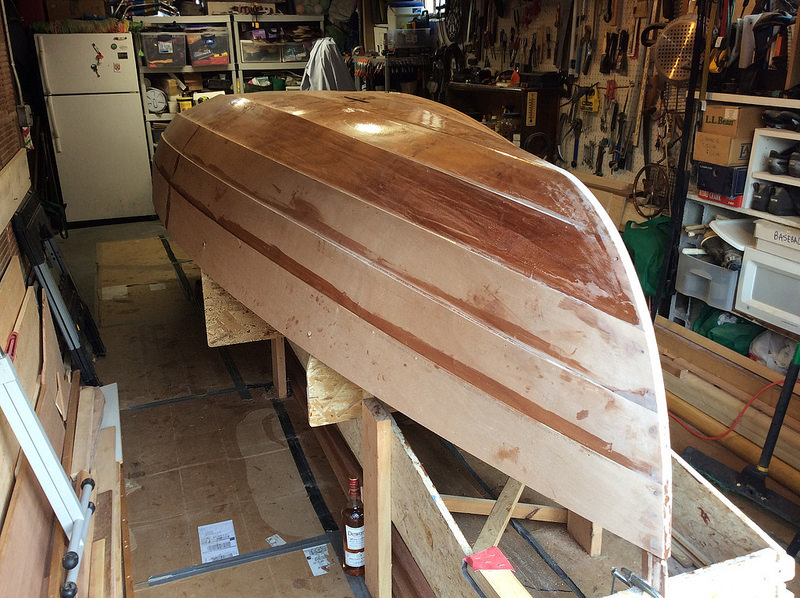 … Clint mentioned that this was great, because he had never seen a CIY “in the flesh” before.  “But you designed it…” said I, and he replied “Yes, but I only built a half scale model to get the shape down.  The full kit is cut straight from the CAD drawings.”  And mine was only the second one to be built, the first being far enough away that Clint had never actually seen it in person.   Well, that says something about Clint’s computer-aided design skills as well as the CNC technology, because the hull went together just about perfectly.

I thoroughly enjoyed building the boat, and it was really rewarding to see it go from a stack of plywood sheets and some boards to the finished product.  Along the way one major milestone was flipping it over after the hull was built. That was in June 2017, six months after I started.  I felt like I was almost done — but in reality wasn’t even halfway there.  There is a whole lot of work to do to turn a hull into a boat. 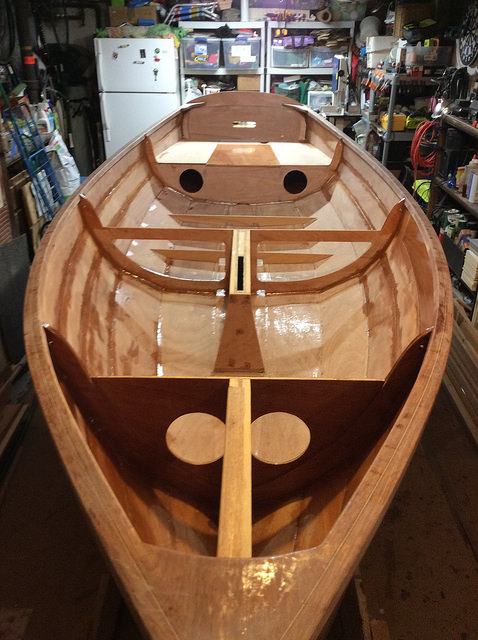 I made all the solid wood parts (spars, oars, rails, floorboards and trim) from lumber I bought myself.  The boat was essentially completed in less than 12 months of building, but by then it was November and I had missed the season, so I spent the next 6 months “pimping my ride” with lots of little details, such as custom-fit food coolers that sit under the rowing thwart, staffs to hold nav lights, and a rope-and-steel swimming ladder.

For you wooden boat geeks out there, you can see a full blog of the whole building process at

If you’re not a boatbuilding geek, you needn’t check it out, as it’s pretty in the weeds.

A 50-something investment banker from Larchmont, New York (about 15 miles from midtown Manhattan). Amateur small boat sailer, boatbuilder, kayaker, musician. I grew up spending summers sailing the New England coast on my grandfather’s beautiful 47’ 1952 Sparkman & Stevens wooden yawl. I’ve lived in Larchmont, a major and historic sailing center on Long Island Sound, for 25 years, but career and family obligations kept me off the water for all of my 30s and 40s, and only about 7 years ago did I get back on the water, first in sea kayaks, and then in small boats. View all posts by Larchmont Jim